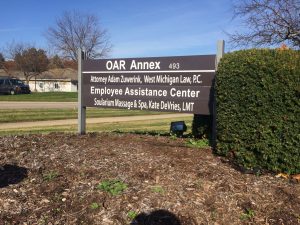 West Michigan Law is one of the newest establishments to the City of Holland, headed by real estate and small business attorney Adam Zuwerink. Zuwerink recently opened a second office at 493 Century Lane, Suite 103, after originally opening a Muskegon office in February, 2013.

“My family and I moved to the Holland area last year when my wife accepted a teaching position at Zeeland Public Schools, and the time was right to add a second office location to better serve our expanding client base in Ottawa County,” said Zuwerink. “The economic climate in Ottawa County is second to none in Michigan, and it has been a blast getting to know so many innovative entrepreneurs in the area.”

West Michigan Law’s services include business, real estate and estate planning legal work. Focused almost exclusively on the transactional side of the law, representing a broad range of business and individual clients, Zuwerink’s mission is to change the way people interact with lawyers.

“While the role of a real estate and business attorney as negotiator and counselor has not changed, the use of technology has greatly impacted the way legal services are provided to clients,” said Zuwerink. “Through the efficient use of technology resources, I work with my clients to provide legal documents and services at the speed demanded by today’s business owners.”

Founded by attorney Adam Zuwerink in 2013, West Michigan Law, P.C. strives to provide the highest-quality legal services on an efficient and cost-effective basis, focusing on business, real estate and estate planning legal work. West Michigan Law is headquartered in Muskegon, Michigan at 900 Third Street, Suite 203, with a second office in Holland, Michigan at 493 Century Lane, Suite 103. For more information, please contact us at adam@westmichiganlaw.com or call 231.457.4235